As we all know, Solar Power is the creation of electricity from the sun using solar panels to harvest the sunlight and turn it into electricity. 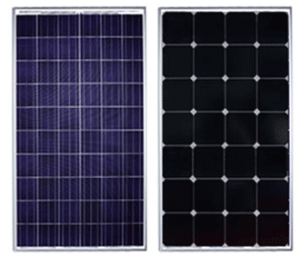 The are two main categories of Solar Panels

Standard Rigid Panels used in the conventional solar systems we see on house rooftops, and Building Integrated Solar Panels (BIPVs) that are integrated into the building materials such as windows and roof structures.
With the standard rigid panels, there are two main types;
Mono crystalline and Poly crystalline.

up a solar panel.

Poly Crystalline panels use groups of multi crystal silicon cells. In multi crystal cells the silicon is many pieces all formed together in different directions which causes a higher resistance and therefore less efficiency.

This is why Mono crystalline cells have a few percent higher efficiency than the Poly Crystalline panels.

An inverter is required to transform and regulate the DC current coming in from the panels and to step up the voltage to transform it to household 240v AC.

Inverters also have what is known as MPPTs (Maximum Power Point Tracking). MPPTs track the suns power and maximise the amount of power the solar panels can deliver.
A MPPT will only track the power from one angle of the sun, so if the solar panels need to be installed on two roof faces with different orientations, then an inverter will need to have 2 MPPTs
An inverter usually has one or two MPPTs.

Inverters are best run overloaded than under-loaded. It is quite safe to run a good quality inverter at 30% above its rated operating size; for example a 3kw inverter could run an extra 0.9kw, provided the panels combined voltage matched with the inverters total voltage input.

If the inverter is overloaded and the panels all face due North; then during the peak of the day the power input may exceed what is expected, this is the main reason to choose a good quality inverter so that it de-rates if the load becomes too much, such as a Fronius inverter.

There are four main different types of inverters used for household and commercial solar power systems; Grid Tied, Hybrid, Stand Alone and the smaller 12, 24 and 48 volt portable type of inverters as used in camping

Grid tied,  means the inverter needs the power grid to work, when the grid goes down the system stops working.

Hybrid inverters also known as battery ready, are equipped to charge up batteries  but they are also reliant on the power grid to work.

Stand Alone Inverters  are used in Battery Storage systems not affected when the power grid fails and can still deliver power.

How much power does a system deliver

This is worked out on the size and amount of panels and the amount of sun and the orientation of the panels.

To calculate the amount of power a system will deliver, multiply the average amount of hours per day by the size of the solar system to get the amount of kwhs produced by the system per day.
In Perth there is an average of about 7.5 – 8 hours a day.
A 3kw system would deliver 3 kws an hour or about 23 kws a day, about the same amount as the daily average household power consumption

Sizing up a system for your household needs

To size up a system for your house, look at the power bill to see how many kwh units you use daily. This will tell you you how many kwh a day you need your system to produce.

In most case a 3 -4 kw system is more than enough for most families, bearing in mind at night the grid is being used, or a 5kw system for a larger household.

Without doing some exacting calculations and referring to the household power bills, it is difficult to give a correct account of the pay back period, but an average estimate would be somewhere between 3 to 5 years, which is very good when you consider the system will last a good 20 years.

If thinking about battery storage, then a slightly larger system would be needed to make sure there is enough power for daytime use and enough to charge up the batteries for night time use.

Solar Battery Storage is going to be the way of the future, for some helpful advice, drop into the office at unit 2 / 31 Christable Way, Landsdale or give us a call on 0401404442.